Rate this item
(3 votes)
The Swedish drummer has a new album and brings his propulsive instrumental sound to Ronnie Scott’s on 26 April. Magnus Öström is known to most global jazz listeners as the former drummer e.s.t., the most successful jazz group of the 2000s started with his childhood friend Esbjörn Svensson. However, since the latter’s untimely death in 2008, Öström has composed and performed his own music which arguably takes his signature sound in e.s.t. sound a stage further. The latest release - Parachute - is his third album, and he and his band will be playing Ronnie Scott’s live on 26 April.

1. Parachute is your third album. What musical stories have you sought to tell with this release?

Well, it comes from a variety of reasons. When I started composing some of the tunes I found that the music was really helping lift me and helping me get through some difficult time. You know, like everyone I have some ups and downs in my life, not just about the loss of my friend Esbjörn, and I found that my music has always been there to save me, it has been sort of my Parachute, which is why the album is so-called. This record is a celebration of music itself and the energy it carries. In talking about the latest album some people have told me that it has a lighter, more optimistic feel than my previous two albums [Thread of Life and Searching for Jupiter]; perhaps that reflects that I was in a very good mood when I wrote most of the tracks!

2. How do you compose your music, as a drummer - do you start with a rhythm, a chord sequence, a word? What’s your process?

Actually, I usually start off at the acoustic piano in my rehearsal room. Sometimes I’ll have a chord pattern or a melody that pleases, and then I’ll spend some time on the piano developing it, seeing where it heads to. Then, I will go to the drums and think about the right rhythm for the tune. I have to switch from being the composer to being the drummer and think to myself, ‘what does the composer want me to do, here?’ It is important to let the ideas develop over time and it’s very much a process of building. I’m not the greatest of piano players, so I have to do things layer by layer. 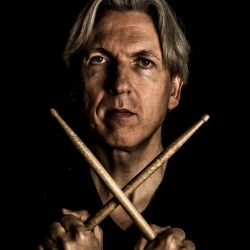 3. I’ve always been interested in how musicians name instrumental tracks. Did all the tracks on the album have a clear name behind them when you recorded them?

Naming tracks is an important part of the creative process - it is important for providing a guide post for the listener to help communicate to them what you are trying to say with the music. So, for example, in e.s.t. I was largely responsible for coming up with the names for the tracks. So, look at the third track on this album, The Green Man and the French Horn. It is a track that’s about fond memories of an earlier time, when I was living in London in the 1990s, when I and a friend would go and drink in the pub nearby where we lived, called The Green Man. But it’s also autobiographical, because I played the French Horn for a year growing up. Put those memories together, and you have the song title. It’s always an intensely personal process.

4. Your band - Daniel Karlsson, keyboards; Andreas Hourdakis, guitars; Thobias Gabrielson, bass and keyboards - is settled for touring and recording and has become very much a part of the signature Magnus Öström sound. How did you get together?

I was working with a Swedish female singer, Jeannette Lindström in the 2000s as her producer and held a series of auditions in Sweden. I liked what Andreas and Thobias were doing and thought that they had something which would work with the ideas I was developing after the end of e.s.t. Daniel came along later; he was already quite an established name in Swedish jazz. He took over from Gustav Karlöff, who played on the first album but was not able to join me on tour. We’ve had a good response to our music which is always a good sign that you have the right collaborators.

5. Did you pick these players to match your sound, or did the sound develop once you picked the players?

As a musician I had a clear idea of what music I wanted to develop at the start but sure, when you put a band together you seek to learn from each other as you play together, and encourage others to share their opinions and put forward ideas. They have all made important contributions to the music on this album, though I’m still the captain steering the ship, if you will. 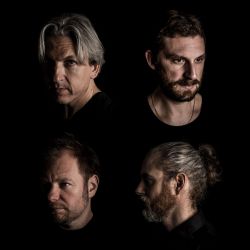 6. The band is playing at Ronnie Scott’s in April. How does it feel to be playing at the home of jazz?

It’s great, I’m looking forward to it. When my band last played at Ronnie Scott’s in support of my second album Searching for Jupiter, that my first time playing a this venue. Funnily enough, I never played here with e.s.t. We played the Pizza Express in Soho, but then it was straight from there to the Royal Festival Hall and tours selling out stadiums, so we never got to play there as a trio. Obviously, it’s got a lot of history. You can as a musician draw a lot of positive energy playing at a venue like Ronnie Scott’s from knowing about all the great musicians who’ve played there in advance of you. I’m looking forward to the show.

7. You’re a tremendously propulsive, technical drummer, but when you play live your stage presence is very calm and undemonstrative. Do you ever feel like kicking over the kick drum or throwing your sticks in the air?

Ha-ha, no, not really. Sure, people have said similar things when they’ve seen me perform. I guess for me my focus as a drummer on stage is to develop the music and the sound on each song, and that’s what I aim to do when I’m behind my drums. It’s important to, if you will, play from underneath, to let the music well up and grow. It’s a bit like being a musical volcano - on the surface, you can seem still, but the musical lava has to flow - it can flow at different speeds but it keeps moving, and that’s what I try and channel when I’m on stage.

8. Your drumming is technically challenging with lots of interesting rhythm patterns. Do you use any technical help live to augment your drumming sound?

No, not really, it’s all me. All I really use on some tracks is a delay effect, which can expand the drum sound, but it’s still organic because its under my control and allows me to develop the track over its whole course. So, I don’t use anything like a sequencer, which could sound inorganic.

9. What other musical collaborations do you have planned for this year and beyond?

Well, I’m the sideman in Swedish bass player Lars Danielson’s band [KoJ interview] and played on his most recent albums Libretto I and Libretto II, along with John Parricelli and Tigran Hamsyan, and we’ll be doing a number of shows together this year. I also still have a couple of further concerts along with e.s.t. bandmate Dan Berglund. Since 2013 we’ve been touring with the show e.s.t. symphony, along with arranger and conductor Hans Ek, which is a nice way for me to keep this great music alive and available to audiences.

10. Finally, how is the Swedish jazz scene looking at the moment?

Well, I’m not sure how authoritative I can be. I’m still sort of rediscovering it in a way as I lost touch for many years through touring with e.s.t. and with my own band. I’m not really sure who to suggest your readers look to discover. Well, of course, I like what Andreas’ trio did on his recent album and Daniel Karlsson’s music is great at the moment. But there are plenty of great musicians out there in Stockholm and the rest of the country that are worth discovering.