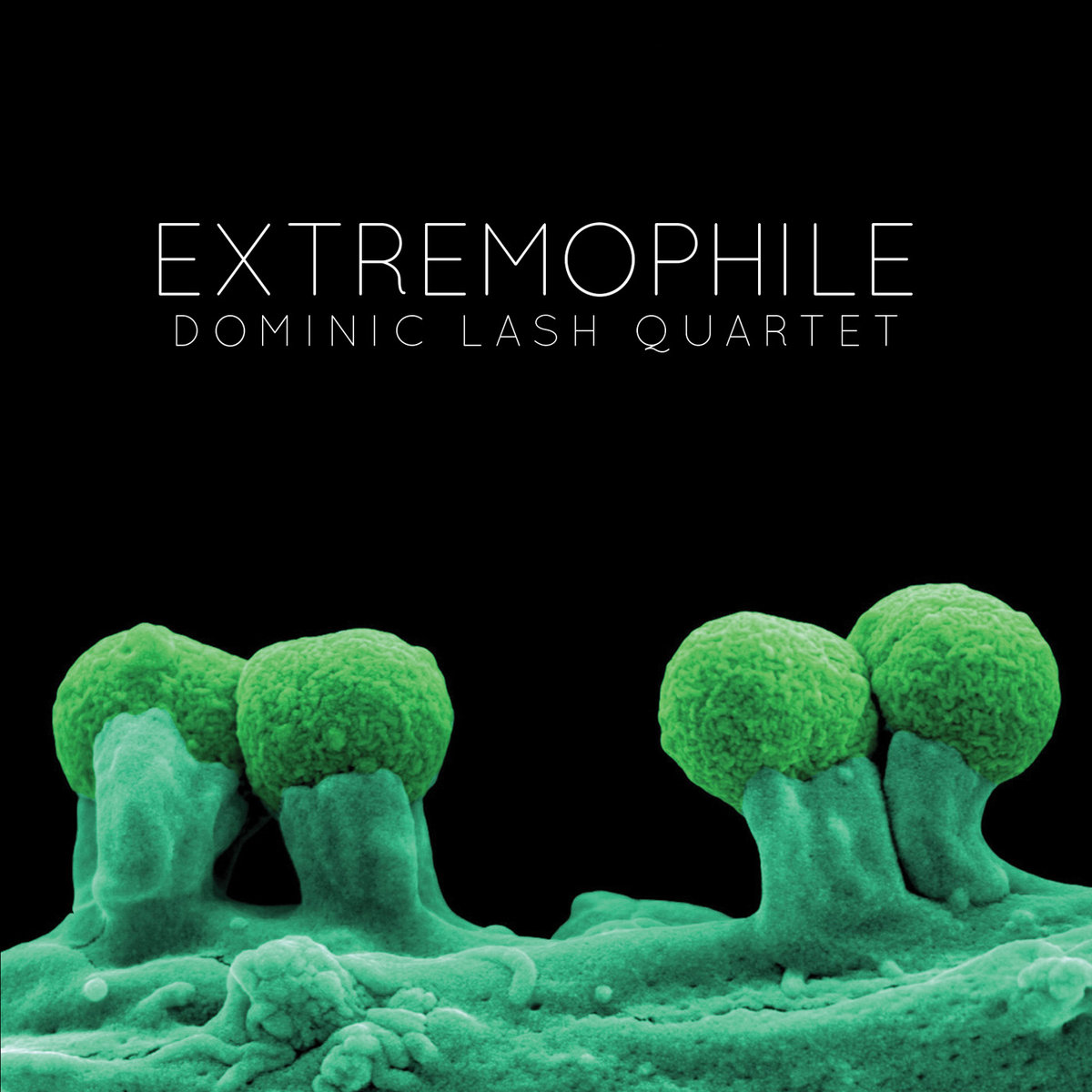 Dominic Lash hardly needs introducing such is his reputation on the UK jazz scene and elsewhere.  He has played with various combos and stalwarts of the jazz scene. He has released a new CD, Extremophile, with  his quartet comprising Dominic Lash - Contrabass, Javier Carmona - drums and percussion, Ricardo Tejero - alto sax and clarinet and Alex Ward electric guitar and clarinet. Their last CD, Opabinia, (Babel Label) received great reviews and this CD continues in the same style, so it was always going to be something following what was a pretty bar already set.

Dominic is one of the leading players in the current scene. He came out of the Oxford Improvisers collective and has since performed with luminaries including Evan Parker, Tony Conrad and Tony Buck. Dominic's compositions merge the perceived boundaries between classical and avante garde.

The CD opens with the aptly titled Puddle Ripple a collection of rippling sounds which eventually intertwine - rather like the ripple rings on a puddle when you drop a stone in. First a splash of seemingly unlinked sounds, then gradually a coherence and shape emerges before it disappears. Short but sweet and a good opening to this album. Mr S.B. is led in by double bass and percussion and some deft detail on the guitar leads into a rhythmic, swing-beat section with some very cool sax lurking in the background. The bass walks up and down, allowing the swing to pull the rest of the band into some terrific individual details. This track shows the breadth of composition on the album and the sax is gorgeous with explorative intuition and flair. Behind this, the drums of Javier Carmona intercept and  react with almost perfect timing. A lovely loose-stringed solo from Dominic Lash emerges from the silence in the second section before percussion, guitar and finally sax work the theme up into something of an epic free playing finale but still cleverly centred around the central chords. Ear candy.

Fumuex Fume has a distinctly European feel and swing to it, inspired in the mind by the title of course (Smokey Smokes in French) but also in the delicacy of its swingy, strolling lilt at the start and the carefully gapped rhythms, so typical of French and Flemish music. However, there is also the introduction of some well placed off-beat rhythms over the theme which lend a certain 'je ne sais quoi'. Palpito ( throb in Italian)  is very different and has a heartbeat of bass running through over which the others add their own contributions in the forms of gentle rhythms,  buzzy notes and intricate little riffles of sound. The reeds sound like demented wasps in some vast echoey space at one point but it adds to the fearsome ferocity to which the track builds. Scary- and this track certainly delves into parts of the brain others don't .

Unbeknownst is a short journey with the reeds and totally gorgeous with double clarinets of Alex Alex Ward and Ricardo Tejero simply enjoying good conversation. Slailing is different again and very atmospheric from the start with reeds over the double bass, deeply supporting underneath. Like a plot, it works itself out, lays out a few misleading paths and then develops. The accents here are wonderful and  in this track, the quartet  show how well they listen and work together.   The resonance from the bass strings emerge at several points, emphasising the texture prevalent in this track as your ear finds it and tunes in. Then the electric guitar spoils the atmosphere in a good way with perfectly pitched countering notes and rhythms from the drums pick up the  dissonance which ensues. Structurally, this is really good and offers surprises with each listen.

Mixed Mixed finishes the album and begins with sonorous notes from the double bass, over which the others add delicate melodic contrasts before it builds into a whirlwind of noise, each musician adding their own quality and emphasis. Sections swing irresolutely whilst others develop into an almost free fall , stopping just short of the drop. An amazing track.

What is so good about this album is that there are lots of references to other styles and nods to alternative compositions but, with the strong, supportive bass from Dominic guiding and enforcing stylistic anecdotes, there is also a generosity extended to the other instrumentalists - and the listener - so wherever your jazz taste lies, there is something, an echo, here for nearly every listener. This is simply great music, strong composition, put together by a quartet who read each other well, whether it is in short ensembles , solos or all playing together.  The percussion is outstanding. A few years back percussionist Terry Day told me about Javier but this is the first time I have really heard him on a recording and it won't be the last. As I said, great musicians, great structure in the composition and terrific improvisation. In my opinion, what else is needed?  Must have music indeed.

To buy the CD go here or digital downloads from Bandcamp.