I started playing double bass in 2008. I was playing steel pans back in primary school. I used to play the bass version and was in the middle of six-oil drums. I wanted to play an instrument that I could have at home and started to play the electric bass, which I picked up when I was about 15. I played a lot of Motown, Stevie Wonder and Marvin Gaye. A lot of Motown musicians were jazz musicians and it was a natural progression to the double bass for me.

When I was younger, the primary school were handing out leaflets to play the steel pan. I went and I loved it. I don't play them anymore. I remember there was this competition called the Panorama which I used to compete in for a good few years.

I still play the electric bass.

2. What was the first tune you learned?

The first Jazz tune that I learnt was Solar by Miles Davis. That was back in 2004.

3. Which famous musicians do you admire and why?

I would have to say Christian McBride. He's is one of my heroes on the bass. He's just simply amazing. I have seen him play and had the opportunity for meet him. I was in Italy for the Umbria Jazz Festival last December (2016) and was playing with the Japanese Pianist Chihiro Yamanaka. He was there in Umbria with his trio, so I got to meet a and speak to him. He was really supportive and friendly. He's incredible.

4. Were you influenced by old records & tapes? If so which ones?

Yes definitely, definitely! I would say starting out with my first influence was Oscar Peterson.

5 When was your last performance?

My last performance was Friday (24th November 2017) at the Fleece Jazz Club in Nayland, Colchester.

6 How do you relax before a performance?

I just chat to the guys, the other band members. I think we are very blessed in this job that the group who I play with are my friends as well. We have a laugh before going on the stage.

7. Have you performed outside the UK?

This year I have performed in Germany and at the start of the year I performed in Italy. I am trying to remember them all. Next week I am going to Brazil with Nubya (Garcia).  Jazz:freshed are taking some bands out there to perform as part of the international outreach project to show Brazil what is happening in London. 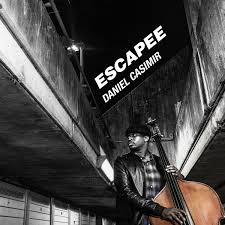 8. What was the inspiration for your current and first album - Escapee?

The title track Escapee is dedicated to my son. He was two at the time and he managed to work out how to climb over the gate. His is an escapee. We caught him and he's cool. He put the toys to the side of the gate and stood on them; then he climbed over. Also, it was about me becoming a father for the first time and moving back to London. The move came at the right time. Everyone was supporting each other.

9. What are your future plans and who would you like to perform or collaborate with next?

My future plans are that Tess (Hirst) and I, the vocalist on the album, are planning on doing a co-led project together.  We are currently writing and in the middle of that. We have got maybe about five to six tracks, and will try to record in the middle of next year (2018), and have the release ready for the end of 2018, but before the beginning of 2019.

I would definitely love to play with Wayne Shorter. He's one of my biggest inspirations. He's a real hero of mine.

I don't really know. You’ve put me on the spot. I listen to a lot of classical music and I am looking to write for a string quartet.

One time I was on my way to a gig and left my bass at home. Luckily, I was early and was able to go back and get it, and made the gig. It was all ok. The car is pretty big and I gig regularly, thinking the bass was in the car.  It was quite recently, so I will never do that again.

Thank you for inviting me to do the interview and I appreciate your support.

The album is available from https://jazzrefreshed.bandcamp.com/album/escapee