Rate this item
(4 votes)
Multi-award winner as best jazz vocalist - BBC Jazz Awards 2007 and 2004 and Parliamentary Jazz Awards 2018, alongside nominations from the Jazz FM Awards 2013 and Downbeat Magazine 2017 - Ian Shaw has amassed a number of highly acclaimed internationally released albums and is a popular performer both in the UK and the US. 2019 saw Ian recording What's New with the legendary saxophonist and composer, Iain Ballamy and young piano player, Jamie Safir. The album was released in April 2020.

1. It’s been around twenty years last played with Iain Ballamy on In A New York Minute. Why the reunion now?

Iain has been on around five of my recordings. I was a big fan of Loose Tubes. I wasn’t making music at that point, other than the odd piano bar gig in hotels. I remember going to see Loose Tubes at some festival, and he shone for me. He had this very particular thumbprint way of playing any one of the two instruments I’m familiar with playing. Inevitably I reached out to him when we all playing more gigs. He played on a 1995 album of mine day called Famous Rainy Day, which was on the EFZ label and produced by Paul Stacey. It was my first slightly less jazz, more acoustic funky album. He played on that, playing soprano and alto on some of the tunes. So we’ve known each other for a long, long time… 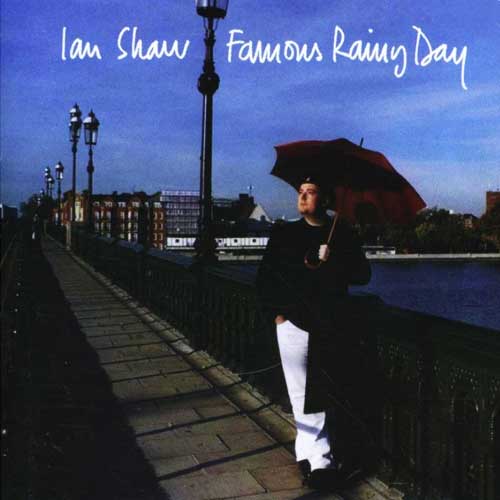 We always kept in touch as friends. It was his idea, I think. We were on a festival gig with different bands, and talked about doing something. By 2000, I was signed to the Milestone label in the States then. I was touring with Cedar Walton, Billy Higgins and David Williams, they were my band. Billy got sick and died (in 2001), and Cedar said ‘let’s not have Billy Higgins, let’s have a space or a completely different voice’. Then he suggested that we bring in ‘that tenor player I saw you with at Ronnie’s once. Pete King (of Ronnie’s) always made sure I played opposite Cedar or Horace Silver because he knew it was a good bill! Back in the day when we used to do two weeks at Ronnie Scott’s! My god, with smokers in the audience! So that was the story behind Iain’s involvement on In A New York Minute. We rehearsed a few nice arrangements; Geoff Gasgoyne gave me a few nice arrangements, albeit without the drums, which was odd. There’s a song on there called When Furry Sings The blues, which was only the second time I had recorded a Joni song. A lot of those arrangements were quite alien to Cedar, so he really loved getting into a slightly different language to what he was used to. Iain slotted in very well. We did a London gig at the Purcell Room and i remember standing at the side of the stage hearing Iain, Cedar and David Williams, playing brilliantly without drums - it was so exciting! That was the beginning of it all… 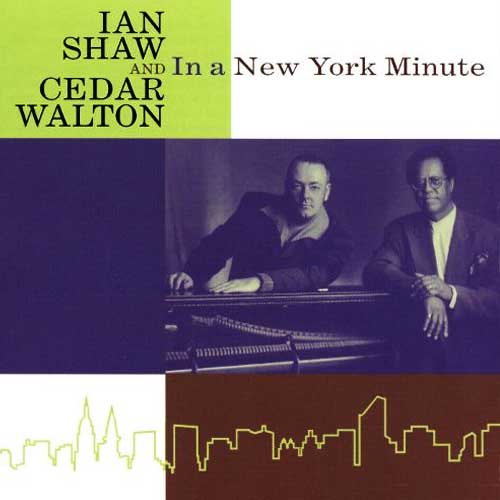 2. Why did you use Jamie Safir on piano on this album?

It was Iain’s idea, he likes Jamie’s playing very much. He's always been one of those musicians who looks to the younger generation for collaboration. As do I, I think it's very exciting. I'm always amazed and completely blown away by the jazz-educated generation, shall we say! I love their eccentricities is well; it reminds me of when I started.

3. Your jazz all last two albums on jazz Village included a bit of pop, soul, and even funk. The new album feels like a back to basic - was that always the plan?

Oh yeah! There’s nothing I like more than being in a smallish room with a couple of musicians singing standards. I can’t ever deny that, and I always look for new ones to sing. the songs were mostly suggested by Iain on this album, I have to confess. It was particularly resonant because maybe three or four of the songs remind him of his father; his father was a jazz pianist - he sadly died last year. So, for example, I’ll Only Miss Him When I Think Of Him was a favourite of his Dad’s, for his Mum. Once Upon A Summertime and Prelude To A Kiss, too. It’s also the first album I’ve ever done where we owned a part of it; everything else has been for a label. So it feels like a nice stepping stone to maybe making more music, and making music where we don’t have to wait around a year for it to be released. The Team at Jazz Village were great; the album looked great, it was available when it needed to be, and afforded me some nice shows abroad. 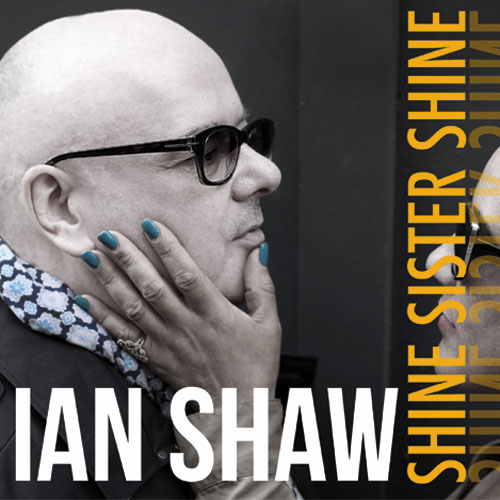 4. It’s mostly standards on the new album, but you also chose two Bacharach songs. Why was that?

Alfie was a bit of a sentimental choice; twenty years ago we recorded Alfie on the In A New York Minute record. The lyrical are of that song is so beautiful and so positive; it’s like a question - you mean you don’t have the capacity to love, really? “Without true love we just exist.” It’s so true. It’s a wonderful lyric by Hal David. You’ll Never Get To Heaven - again, I think it must have been a song Iain grew up with. We did an on-the-spot arrangement which is great to do live. Except we aren’t on tour at the moment!

5. Everyone loves the Bacharach melodies, but I often think Hal David’s lyrics are under-rated…

Of course! They also trod new ground - they were often very domestic lyrics, talking about cars, highways, drinking wine. It was quite unusual to have that after all the Tin Pan Alley songs, the residue from show tunes. In many ways they were the first proper pop songs, certainly in America, that had some sort of clout. The lyrics are completely beautiful, and profoundly singable - and almost haiku in their simplicity. I never really tire of singing them. The only one i can’t sing - which I do sing, because it makes me laugh - is This Girl’s In Love - which has some lazy rhymes in it!

6. The new album has much more of a ‘live’ feel than your previous albums. How did that come about?

It was the whole thing really. I must confess I’m not a fan of singing in a studio in any way, unless it’s part of layering up vocals for a specific sound, or me producing another artist. I always feel that I’m not at my best on records, but I acknowledge that you have to do that to keep that part of your career afloat! Cooper was unique - he knows the people that own this beautiful recital hall in their grounds, a National Trust house - and they put on lot of concerts there. We funded it ourselves, so we ‘own’ that part of it. And he said I’ve got this really good engineer - he’s worked wit Van Morrison and Peter Gabriel - Ben Findlay. He’s a bit of a legend. He completely understands how to mike up a singer with a small ensemble. Mostly male singers, incidentally, but he’s also worked with June Tabor, who I’m a big fan of - who Iain plays with regularly. She slagged me off on Radio 2 once, but we’ve made up since then! She accused me of sounding too much like Johnny Mathis! Which is no bad thing for me! 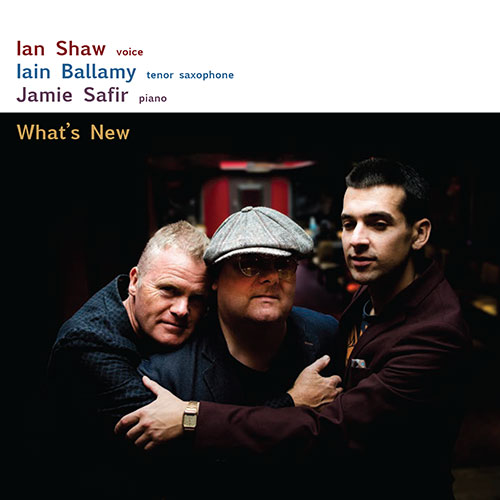 7. With touring on hold, will you be doing any online promotion for the new album?

We were scheduled to play at the South Bank Centre (in London) and at Cooper Hall, which had nearly sold out. I’m barely on Instagram, but we’ve been getting some very nice messages through Team Shaw -  a you guy called Etienne - from people who actually buy music. We’re going to do as much as we can online.

8. And you’ve got a new song, We Stopped Talking coming out. Tell us more…

Jamie and I have written a song, and recorded it, just as all this was happening. It’s a song about living London, memories, and love, and families. There’s also a Windrush verse in their for my friend Bumi. It was inspired by a book called London Made Us by Robert Elms. Jamie’s mixing at the moment, and the accompanying video is me, sneaking around, folioing bits of London - almost from my pocket - in these weird times!

Watch the video to We Stopped Talking here:

8. What’s coming up next, musically?

I’m going to go to my piano room finish a song - on the Fender Rhodes, with a cup of tea! I’m hoping to re-arrange my tour of Austria and Germany - with my trio, or my regular pianist, Barry Green. A lot of those dates have been offered back to us in the autumn, assuming we get back to some state of normal. Hopefully things will pick up from where we left off. I’ve got four shows at Ronnie Scott’s in September where I’ll be doing Bowie and Joni with my band - all new arrangements. You’re probably the first person to know! I thought that would make a really great show, as I’ve got a special connection to both of those artists. I did some live backing vocals for David Bowie a long time ago, and I recorded a whole album of Joni Mitchell’s music. We’ll also be pushing this new song, which is call We Stopped Talking. And with this album, hopefully we can pick up all the dates well lost.

9. Last time we spoke, you were telling us about your work with refugees in France. How has that been impacted by Covid-19?

The thing that’s causing us the most pain is that we can’t help in Northern France; we can’t get there to do it. There’s a whole raft of people that we look after, including the small NGOs that my charity looks after, and we simply can't get anything over. You have to fill out this form. Thankfully, I speak French. I was travelling over on the Eurotunnel and there is a section on the form saying ‘tick this box if you’re bringing unwanted vulnerable people assistance’. So that was me finished in France for now. It’s mightily frustrating…

10. Kind of Jazz is coming round to dinner. What’s cooking?

What’s cooking, brother! I’ve got some signature dishes. I make a vegan gooseberry fool - let’s work backwards. I do a good cheeseboard - half vegan, half non-vegan. I eat fish, I don’t eat meat. So I do a fantastic fish stew. For a starter, I do mackerel pate, I make my own bread sometimes. My sea bass is also good! I also make sea bass in a lime, orange and macademia nut sauce.