Rate this item
(18 votes)
Multi award-winning /nominated vocalist, lyricist and producer, Georgia Mancio, is one of Europe’s most respected, adventurous and multi-faceted new artists. Her multi-lingual music references classic jazz and Latin alongside her own astonishing writing, always stamped with an unfailing emotional integrity. In March 2021, Georgia released her eighth album – Quiet Is The Star, and the second in partnership with Grammy-winning pianist/composer Alan Broadbent. Their first album, Songbook (2017), was launched at a sold out headline show at Ronnie Scott’s (“unequivocally, one of the gigs of the year” Jazzwise) with subsequent performances across Europe and the US, including famed New York clubs Dizzy’s (Jazz at Lincoln Center), Kitano and Mezzrow.  Georgia is interviewed by the acclaimed pianist and singer, Wendy Kirkland. Wendy is a part of the excellent Women In Jazz Media initiative, and KoJ is delighted that she has offered to join the team.

1. Alan Broadbent, 33 songs together now. What next?

Haha, well, we have already joked about volume two of the book and I am behind with three great songs to write lyrics for so I should be cracking on! We think there is a third album in us, to include some of newer songs we wrote during last year’s lockdown but for now, it’s time to grow our reputation as songwriters and keeping up the consistency. 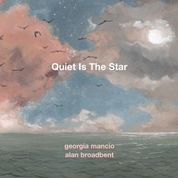 2. Kate Williams – I’ve always been a huge fan of her piano playing. What do you most enjoy about working with her?

I love that we pushed each other with our joint Finding Home project. We both wanted to work outside our comfort zones and it was great to do that with someone you know well and trust. Aside from her tireless passion for harmony and creating beautiful sounds, she works really hard so she’s fantastic to work in a partnership with. I’ve certainly missed her this year, and my quartet, and well everyone I’m lucky enough to work with!

I pushed myself hard last year to get the album and book finished. I didn’t realise it at the time because it was so positive having the focus when so much else had stopped. But I don’t feel the need to rush into another big project especially in a year that has also brought me some heavy personal losses, most recently a beautiful friend and colleague of twenty years, guitarist Dave Colton. Part of the joy of going back to live work is the thought of savouring the little gigs as much as the larger scale events and allowing time to readjust. That I won’t be doing that with one of the most sensitive and dedicated musicians I ever knew will really take some getting used to.

4. You’ve spoken up and campaigned for better general perception and treatment of women in jazz in the past. Do you think things are changing quickly enough and what in your opinion needs to change most?

I don’t think things are changing quickly enough because it’s been such a shamefully slow haul to get to where we are, but things certainly are more positive than ever. The lack of female journalists has been, and still is, an issue but recently Sammy Stein has made a big impact, writing books as well as reviews and articles. I applaud London Jazz News and Jazz Views who have been championing for some time and the new initiative, Women In Jazz Media, is the umbrella we didn’t realise we needed. I’d like to see many more female promoters and panellists and I’d also welcome an end to the divisive way we categorise (female) musicians into singers and instrumentalists.

5.  Are there any plans to resurrect Your ReVoice festival post COVID restrictions?

Every so often I think about it and my most recent flight of fancy would have coincided with the 10 year anniversary of starting it and Brexit so, although I didn’t tell anyone, I was considering a huge celebration of European artists. But the world had other ideas in 2020 so it wasn’t meant to be. I’m really proud that people still ask about ReVoice! because it ran for five years/editions and finished seven years ago. It was a big part of my life – probably too big! – but if I hadn’t let it go I don’t think I would have grown as an artist, never mind writer.

6. Safe Passage and Phone Credit for Refugees – tell me more about why you chose these charities to support, and how this has been working throughout lockdown.

I’ve been supporting both charities since about 2015, when I volunteered in the Calais ‘Jungle’ unofficial refugee camp. The idea for Phone Credit was born from one extraordinary volunteer, James, who was there at the same time and came to realise that as much as food, clothing and shelter, people were constantly in need of our most vital communication service. It’s something most of us take for granted but if we gift say a month’s worth of credit, we are really gifting a love letter home, messages to children, work opportunities, solace, company, direction, solidarity and sometimes a lifeline. They work with vulnerable people around the world now, through a team of dedicated volunteers and with over 60,000 members, unabated despite everything.

Safe Passage work largely with child refugees and trying to facilitate family reunion. Although they are used to working in harsh and hostile environments, I imagine lockdown has been really tough, but also Brexit which conveniently divests the UK of the little legal responsibility it had towards separated families in the UK/Europe. If that scares me, it must be absolutely terrifying for those directly involved. Usually I fund raise on gigs and advocate their work but that’s certainly been pretty impossible this last year. 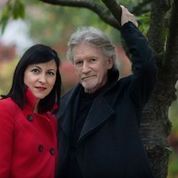 7.  Lullaby for MM, from your Songbook album, features the words “dear Father”. When I first heard this song, it struck me that at some point this lyric would be extra poignant to me, and now it is. Tell me about notable responses you have had from listeners to selected original songs.

Well ironically I started the lyrics to that one as a gift to my dad but never finished it so it became a tribute to him after he died. I think with this album, Quiet Is The Star, in particular, people recognise I have written about real experiences and in dedication to people I love and so there’s a honesty that’s perhaps unmistakeable and identifiable. Alan talks about them as art songs: a chance for people to exorcise shared experiences and feelings through them.

Kate and I did that also in Finding Home, not least the child refugee trilogy which was the best way to communicate such a complex and sadly controversial subject and invite a conversation. Honestly that’s what I most miss about playing live: the chance to meet up after the show, or in the interval and share stories, hear reactions, dissolve the line between audience and performer.

8. What’s the funniest song request you’ve ever been asked for at a gig?

It’s a perfectly reasonable request but I personally don’t like singing Mack The Knife. Once I politely declined by saying I didn’t know the words so as not to offend. This guy pulled out three sheets of lyrics, having just come from the Mack The Knife convention – who knew?!– and I then not only had to sing it, I had to sing all of it! The band thought it was hilarious and modulated on every chorus so it really was an epic.

9. What do you like, and dislike most about jazz in general?

I most like the notion that it is a personal and soulful expression and extension of ourselves. It flexes and develops as we do and as such, is a current and viable way of life and living.  And least, that it ‘should’ be any one way or other to qualify. Not only does that conveniently keep it away from popular culture but creates an elitism that I think does a disservice to both listeners and players.

10. During lockdown the green spaces of our country have been providing a welcome escape for everyone. Do you have a favourite green space that you have been enjoying?

I’m very lucky to live close to a stunning South London space: Crystal Palace Park and I spend a lot of time walking, running and feeding the assorted bird life there. It’s grandeur has faded but its history is everywhere, from the crumbling statue of Dante, to the renovated Sphinx and the anatomically inaccurate dinosaurs. Being in nature is definitely my salve.