Rate this item
(3 votes)
Daniel Karlsson first came to the notice of UK audiences primarily through his role as keyboardist in Swedish group Oddjob and with the band of former EST drummer Magnus Öström. A well-known jazz figure in his native Sweden, he is achieving some increased recognition now across Europe, not least as a result of the success of his own trio’s first four albums, the most recent of which - “Ding Dong” - was released at the start of 2017. In London recently to play Oddjob’s Jazzoo - a 40 minute animated jazz concert for children - at the South Bank, Kind of Jazz caught up with Daniel to talk about his career.

1. Describe what musical journey you are aiming to tell with “Ding Dong”, the new album from the Daniel Karlsson Trio?

I guess we’re trying to tell something about freedom in music and how important that is. More genres has their own specific rules, audiences, sounds, venues and whatever, and that’s true in jazz. There are lots of preconceptions about what is allowed and this comes from both the listeners and from the music companies. Sometimes, it almost gets political. In response to this, I think in a way we’re aiming with this record to point the middle finger up to our own genre of jazz!

2. The press release for “Ding Dong” talks about the recording processes for the album, how it was recorded in Runmarö parts in January in the depths of winter, and partly in June during Summer. Did that shift in seasons shape how you approached the recording?

Honestly no, it just ended up that way. We recorded in the winter as we normally do, but then a few songs can into development during spring, so we had to give the album another go and recorded the. We usually record everything during the night when it’s dark anyway, so probably the seasons didn’t really affect what or how we recorded. But, you know, you have to have a story!

3. If you were asked, what makes up the characteristic Daniel Karlsson Trio sound, how would you answer?

I think it’s hard to describe my music, for sure. I would probably say something like it’s both dirty and polished at the same time. I’ve never been asked that before, so there’s my answer!

4. Tell me about your bandmates, Christian Spering and Fredrik Rundqvist. Where did you meet and what do they bring to your sound overall?

Fredrik and I met at Skurup’s Folk high school about 25 years ago. Two years latter we both moved to Stockholm where Christian already had a career as one of Sweden’s most respected bass players. Together the three of us have worked out a way of developing our compositions that gives us the opportunity to keep on with the composing process in post-production. It sounds easy, but it’s not. You sometimes have to imagine what an “empty and talkative” part will sound like later; meantime, you have to record it first. 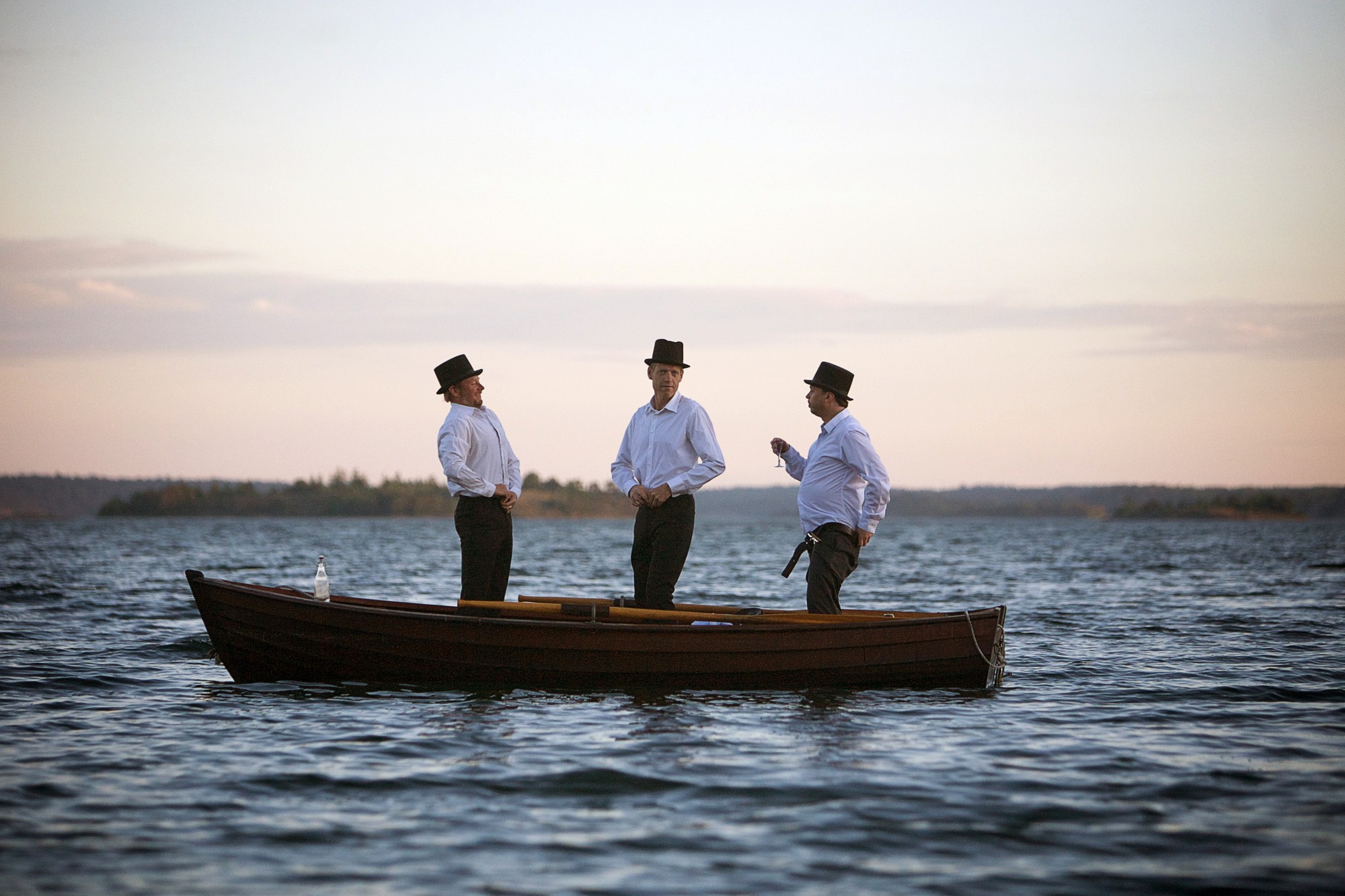 5. How do you approach any new album? Do you go into the studio with ideas fully worked out, or turn up and wait for the muse to inspire you?

We usually only bring sketches to the studio. Lot of ideas come to us as soon as we start playing together. We’re recording in my house which gives us the privilege to keep on as long as we need and want to. Lots of ideas are tried over and over again, for sure.

6. You’ve used the mellotron on a previous album. It’s a very distinctive instrument, unusual in jazz. What does it offer you as a compose and keyboardist?

The Mellotron was just a coincidence. I ran into a nice, kind guy with a mellotron the day before we sent our mixes for mastering. I took the opportunity to just pour out some sticky Mellotron gravy all over the album, and some of it we kept!

7. Your last three albums feature cover art by Richard Johansson that’s very distinctive and child-like. What does it say about the Daniel Karlsson Trio?

I find his art very provocative in a way I like. I sense the same attitude to art in general in him as I want to express myself in music. His paintings on my music give me confidence.

8. If KoJ were to look through your iTunes or CD collection, what would we find?

You’d find the most cheesy pop music mixed with the most high-flying, contemporary jazz!

9. You live on an island on Sweden’s coast near Stockholm. Does the archipelago life and Swedish landscape shape your musical thinking significantly?

I’m not a man who seeks inspiration much in nature or landscape. I ended up in Runmarö mostly because I have a big interest in boats and boat engines [Ed: Karlsson regularly drives a taxi boat around his locality, which provided him with the inspiration for the name of his first album, Das Taxibåt] As a Swede I guess I’ve always taken nature for granted; I would miss it deeply though if I moved.

10. Finally, which Swedish artists would you recommend kindofjazz.com readers should be listening to?

When it comes to jazz piano, sure, Sweden has some big icons on that instrument which I could recommend. But, it’s more fun to go for something contemporary. I would recommend my band-mate in Oddjob - we’re celebrating the twentieth anniversary of the band in 2017 - Goran Kajfjes, for sure; tenor player Jonas Kullhammar is also great. I can also heartily recommend pianist Mattias Landaeus among others.