It's been a while since I have had the opportunity to see this legendary Brit Jazz Funk Band influenced by the hard-Latin sounds of Brazil.

The Bull's Head has been established in Barnes, South-West London for 60 years and is known to deliver good entertainment. Larry Pryce (Author, Broadcaster and Musicologist) spearheaded this social activity that brought tonight’s nostalgic audience together.

The venue has a very intimate extension located at the rear of the building with tight seating arrangements. However, despite the venue size the sound was very well engineered and you could appreciate all the timbre nuances projected by the talented musician’s instruments.

Geoff Castle, original member of PAZ (founded by the legend Dick Crouch), has been playing for approximately 55 years. He certainly knows his "eggs and bacon" (no pun intended), providing historical and memorable anecdotes during the two-set performance, in which the puns were intended.

The band took to the stage with their well-thumbed sheet music before jumping straight into the opening tune titled For Art; dedicated to Art Blakey and written by Dick Crouch whilst at the BBC. Matt Wates on saxophone was referred to as a relative newbie by Geoff as he has only been playing with the band for thirty years. He certainly is the confident, accomplished and solid play most horn-plays aspire to be. 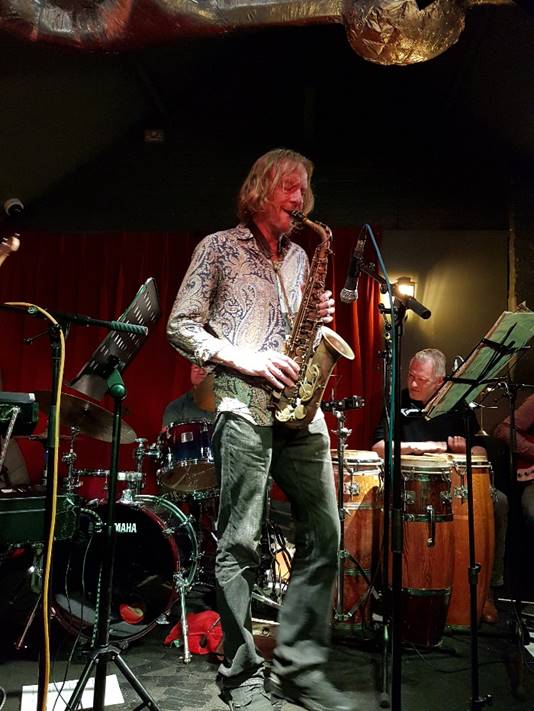 I compared Geoff to Dr Victor Frankenstein; playing in an animated fashion mirroring the grin of the famed Cheshire Cat; surrounded by the Moog, Roland D50 and Yamaha keyboards. There were also some amazing lead bass solos played by Rob Statham, whose persona was cooler than the Arctic Ice.

Geoff introduced original band member - Les Circle on drums, who has played with the band since 1965. That is some CV pedigree. His style of playing was steady providing a stable rhythm to all tunes, as they should do. This was quickly followed by Latin-esk, played with an exciting, punchy and sharp samba conga rhythm by Chris Fletcher. Citron Presse provided a nice change in tempo to a smooth swing led by Dominic Grant on lead guitar.  This gave the packed house time to gather their composure before the up-tempo crescendos.

Earlier I mentioned Rob Statham on bass, and he has to be one of the most technically gifted players' in the music world. I am quite comfortable placing him on the podium next to Marcus Miller, giving Marcus a good run for his money. For me, Rob was the MVP (most valued player) of the night's performance. He oozed funk, confidence and originality during his solos. The clarity of his picking akin to a great lead guitarist. 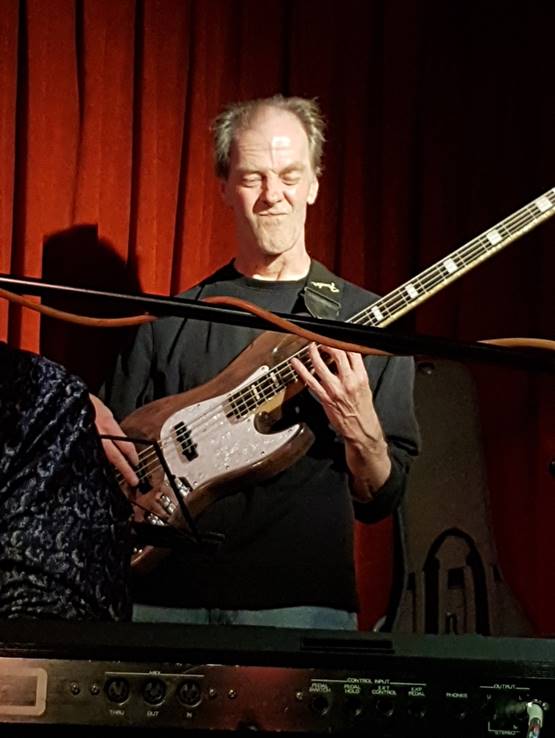 The second set commenced without the percussionist. Towards the end of the first tune Three Blond Mice (taken from the album Look Inside); Chris Fletcher apologised for his short absence in a joking manner. I shan’t repeat this; however there was a short gasp from the crowd, followed by hesitant laughs and giggles. I think they laughed!

Bags inspired by Milt Jackson opened with a compelling strong triplet signature before transitioning into the Latin style jazz funk rhythm that is PAZ.  The conga solo was sharp, energetic and raw, similar to the guaguanco pattern.

Segue straight to James The First, dedicated to Dick Crouch's son, followed by Laying Eggs that was originally recorded with the legendary Guyanese jazz singer and percussionist Frank Holder. Geoff improvised with some light jazz scat. For a moment we went to the world of the Beatniks.

Geoff hadn't created a set list, asking the band members which song should they play, then arbitrarily choosing Making Smiles, taken from the album Look Inside. He added that this was the most difficult tune to play, as the band were quickly reminded of the song structure. After a couple of bars into the first verse the performance stabilised progressing to a tight, yet fluid tune; a complexed dichotomy not easily understood by non-jazz listeners.

PAZ will always be known and recognised for the 1982 jazz funk anthem AC/DC. This had the crowd tapping, nodding their heads, even waving their arms playing air-drums and reminiscing with memories; no doubt from their youth.

Even without any music knowledge, you could still appreciate the remarkably talented musicians and a sense of all round enjoyment from the audience. Their passion was written all over their faces during the animated and interactive performances.

I am looking forward to their return visit.