Rate this item
(10 votes)
Voted one of the top bassists of 2016, 2018, and 2019 by the prestigious Downbeat Magazine Reader's Poll, Mark Wade has been an active bassist in the New York City area for over 20 years. His 2015 debut album Event Horizon and 2018 follow up Moving Day were released to international acclaim. The albums received great critical reviews from a host of domestic and international publications such as Downbeat Magazine, Jazz In Europe, Cadence Magazine, Kind of Jazz, The New York City Jazz Record, All About Jazz, Jazz Life (Japan) and several others.

I went to school for jazz and when I did I came into school playing electric bass. I didn't start playing acoustic bass until I was two years into college. Two years later I was out making a living playing music, mostly on the double bass. I was always able to get enough gigs - practicing and practicing. My attitude was, right from the beginning, that I wasn't going to put out an album until I really thought I had something that was of intrinsic value; that was not just another record of standards, just because you're supposed to do that when you get out of school. I didn't want to make a record until I was playing certain way, as an accompanist, as a soloist, and until I had the material I wanted to present, and the band I wanted to present. I was perfectly happy to wait.

One of the advantages playing the bass is that you're always working as a sideman; that was my focus when I got out of school, to be the best sideman I could be. To raise my chops, read other people’s music and also doing different kinds of gigs. I came out of school with a degree in jazz. I joined a community orchestra in town to get my classical chops up and my sight reading. I fell in love with the music, so I really practised hard with that stuff. Eventually that became part of my livelihood and now I partly make my living doing that as well. And I still play gigs on the electric bass too. That took up musical space in my life, so my focus was not on putting out record. I waited a while, and you see how hard it is to get a project off the ground. Especially in a city like New York, where you make a record and then go right to the back of the line. As time went on I matured as a musician and around 2013 I had the chance to put a band together for a gig, which I hadn't done for a while. When I did that, I was conscious that I was getting old for putting out my first record, and that maybe this was the time. I've put the band together, wrote some more music, and I knew this was it. I remember halfway through that gig, this is it now!

Yes, it was at Flushing Town Hall. We've returned there many times subsequently.

3. And you’ve kept that same Trio together?

Yes, as regularly as you can keep a band together in any city. We do play regularly. We had a bunch of nice gigs this fall, which was really great. We've got a bunch of gigs this spring, then go into the studio in May to make our third record.

4. And you're using the same band on this third album?

Yes, and I think that's really important. I really like the idea of working band. This goes back to where I started. People graduate from college, maybe they have a university degree or a masters degree, and they’re in their mid-20s. They decide to do a record, drop a whole bunch of money, maybe they hire their friends, which is okay, or maybe they hire a couple of famous people to get more attention. That way they have a big name on the cover, or get more radio play, that’s the thought. But invariably when you do that, and you get some famous people, you don't have the chance to play the music ahead of time - maybe you get one rehearsal. You're not very experienced in the studio, it's always daunting making your first album, so you end up producing what sounds like a group of people going into the studio and reading the charts for the first time. That's not exciting to me. I really like the idea of the band as an identity. He knows if I go there, he can come over here. And if the piano player does this, he trusts that the drummer can do that. There’s really a language that starts to develop between three people, especially in a small group like that that can be very nimble. If it's a ten-piece group, then by it’s nature, it’s not so flexible. But having the same people all the time, I think, has led to the success  and critical acclaim that we’ve had. We sound like a band, and that's the best possible compliment you can get from other jazz musicians. You're really playing some music, as opposed to just going through some changes and doing your thing. For me, that's really important as a bandleader. If I wasn't doing this, I wouldn't just turn the piano chair over just for the sake of variety. For me, now the fun part begins, as we’ve been playing together for six years!

5. You’ve been touring with Italian pianist Marco Marconi. Is there any chance you’ll get together in the studio?

Marco mentioned that live on stage the other day, and I was like, yes, we should do that! There are certain logistical concerns. I'd like to make sure we have the material, but I think it would be nice to do. The realities are that to bring band from the States is costly. If you get a gig can support it, that's great, but it's better to have people that are already on this side of the Atlantic. It makes it more plausible to put together tours like this. It would be a fun thing to do; and this is so different from my band at home! 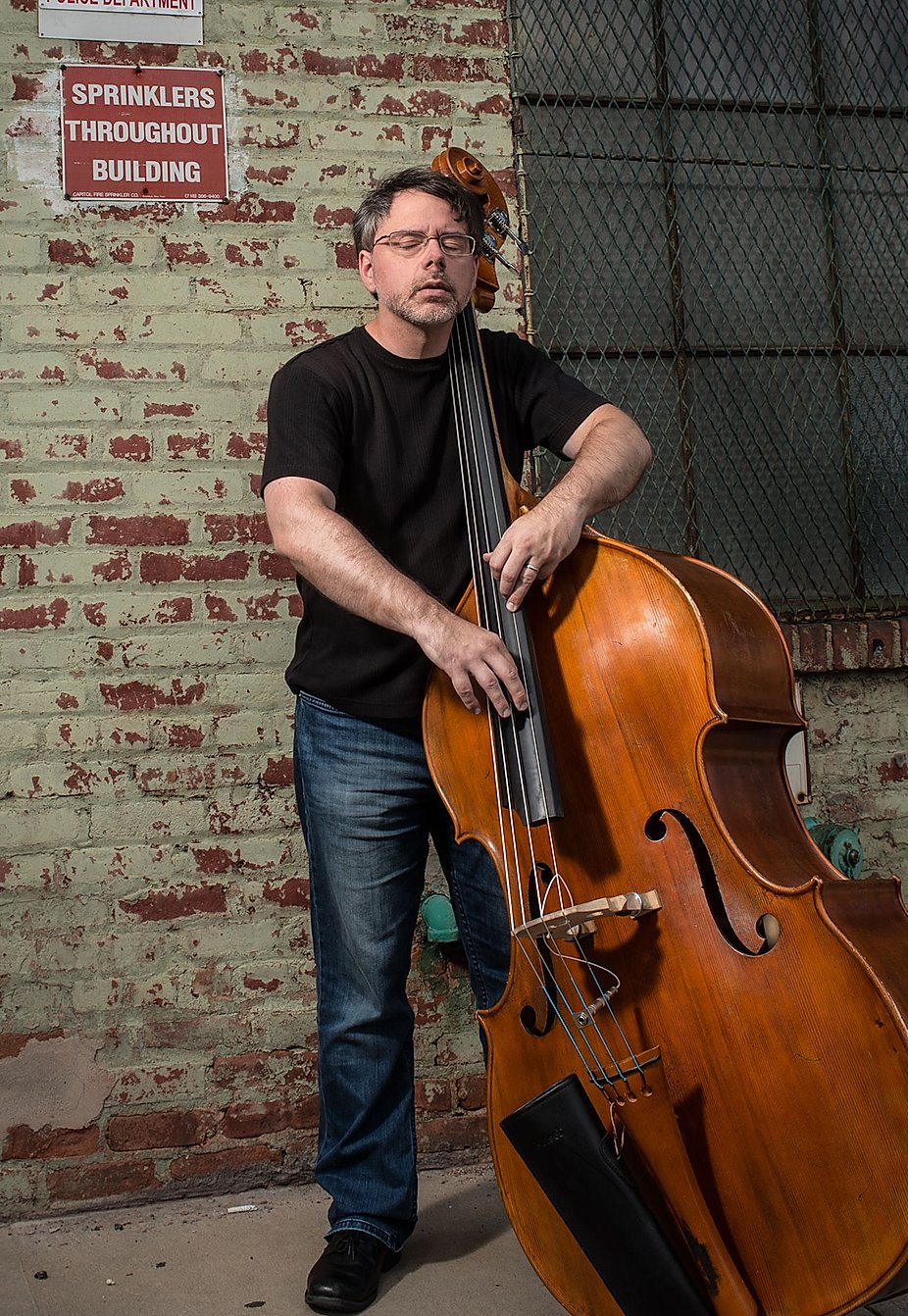 6. Who were your influences as a bass player?

Growing up I didn’t play the bass that much. I didn't start playing the bass that much until I was going into high school, so I was like 14. I was an electric bass player, totally self-taught the first three years, playing in bands and learning rock music. Nothing to do with jazz.

Read our review of Marco Marconi and Mark Wade at the 606 Club here:

7. What sort of rock music?

I was a big Led Zeppelin fan, and knew half the Led Zeppelin catalogue by ear. Even though I started late,  when I got into it I was really into it! I was always practising a lot right from the beginning. I started to take formal lessons about a year before I went to college. After six months of that, I auditioned to get into college. It was all very compressed! Nobody played music in my house. I was always very curious. When I found out about a band, I was always curious who their influences were, and that kept me going back down the timeline, back to blues musicians, then back to jazz, back to Charlie Parker. It took me awhile to go back to straight ahead jazz. But once I got there, I stayed there.

As far as jazz bass players are concerned, I was a big fan of my teacher, Mike Richmond, who I studied with at NYU - he playing Miles Davis towards the end his career, Stan Getz, he played with Bill Evans. As far as older, more traditional influences, I started with Paul Chambers and Ray Brown, Scott LaFaro and the Bill Evans Trio - they were a big influence on me and probably why I gravitate towards the trio as a format.

9. LaFaro had a very different style to the other names you mention…

Yes, absolutely. And that's the thing, I love Scott LaFaro’s playing and Gary Peacock, I love Ron Carter, Red Mitchell - they’re all very different players, actually. I’ve always felt you have to play straight ahead time very well, so I aspire to playing straight ahead time like Paul Chambers and Ray Brown when called upon, but want to have the freedom was a soloist like someone like LaFaro or John Patitucci, with tons of technique, all over the instrument. Or like Red Mitchell, who also had that beautiful tone. For me, the spice is in the variety, and the depth within that variety.

10. Have you started composing for the third album?

It's been done for months, actually. I like to plan ahead when it comes to this stuff. I did that with both albums - I don't wait until two weeks ahead. The whole point of having a working band is that the beauty of the tunes happens when you’ve been playing them a while. Some of the music is hard and the arrangements are tough. I took two years of composition in college. The music I wrote for my senior recital was way above what I could play at the time! I was writing at a much higher level than I could play - I was still just learning the double bass at that time, it had only been two years. But I always had a little bit of a knack for writing. I always think have I done this before call, have I tried this musical concept, have I tried this musical construct? I always try to challenge myself as a writer. So the music’s been written for some time, we've played together a few times, but we’ve still got a few more gigs to go. And then we can go into the studio, relax and just do it. That’s the hope!