Julian Siegel is an oustanding multiple saxophonist, composer and arranger working in jazz with a classical impetus not dissimilar to Julian Joseph and Tim Garland. He was approached by Derby Jazz to discuss a commission, and they ended up putting together a jazz orchestra. The story goes Siegel made a list of his “dream team” lineup and every single person on the seventeen-strong list wanted to be a part of it.

On this short tour with no time off between Derby, Nottingham, Lincoln, Leicester, London and tonight’s closing concert in Birmingham, they’ve been able to ‘try things out’ each night. The music hasn’t been recorded yet. The thrill, Siegel says, is to hear the music played out by the members of the big band and discover “so that’s what it sounds like!”

In the spacious acoustic of Birmingham Town Hall, with this calibre of players, and a set of especially commissioned Siegel compositions, the experience is decorously rich and vibrant, with varied writing and generous scope for improvisation from each of the eighteen instrumentalists. The arrangements make the most of the intense sonorousness and warmth that having this much brass onstage generates.

Wise Child opens with a dedication to Wayne Shorter and something of the elliptical mysteriousness of the soprano master’s work, featuring Mike Chillingworth (alto sax). The great Mike Outram peppers the big band sound with jagged and precise sweeps of electric guitar.

The centrepiece of the evening, Tales from the Jacquard, is a sonata-length integrated suite with Ellingtonian breadth and lightness of touch. It draws inspiration from the lacemaking process that Siegel’s family was involved in in Nottingham, and opens with a field recording of lace-making machinery swooshing and sweeping.

The piece also explains the curious abstract graphic projected across the back curtain: it’s a Jacquard card, a device which controlled the lacemaking machines. Essentially a mechanical score, Siegel has repurposed these patterns of dots to help generate the ‘dots’ of the score: melodies and other features of the music. 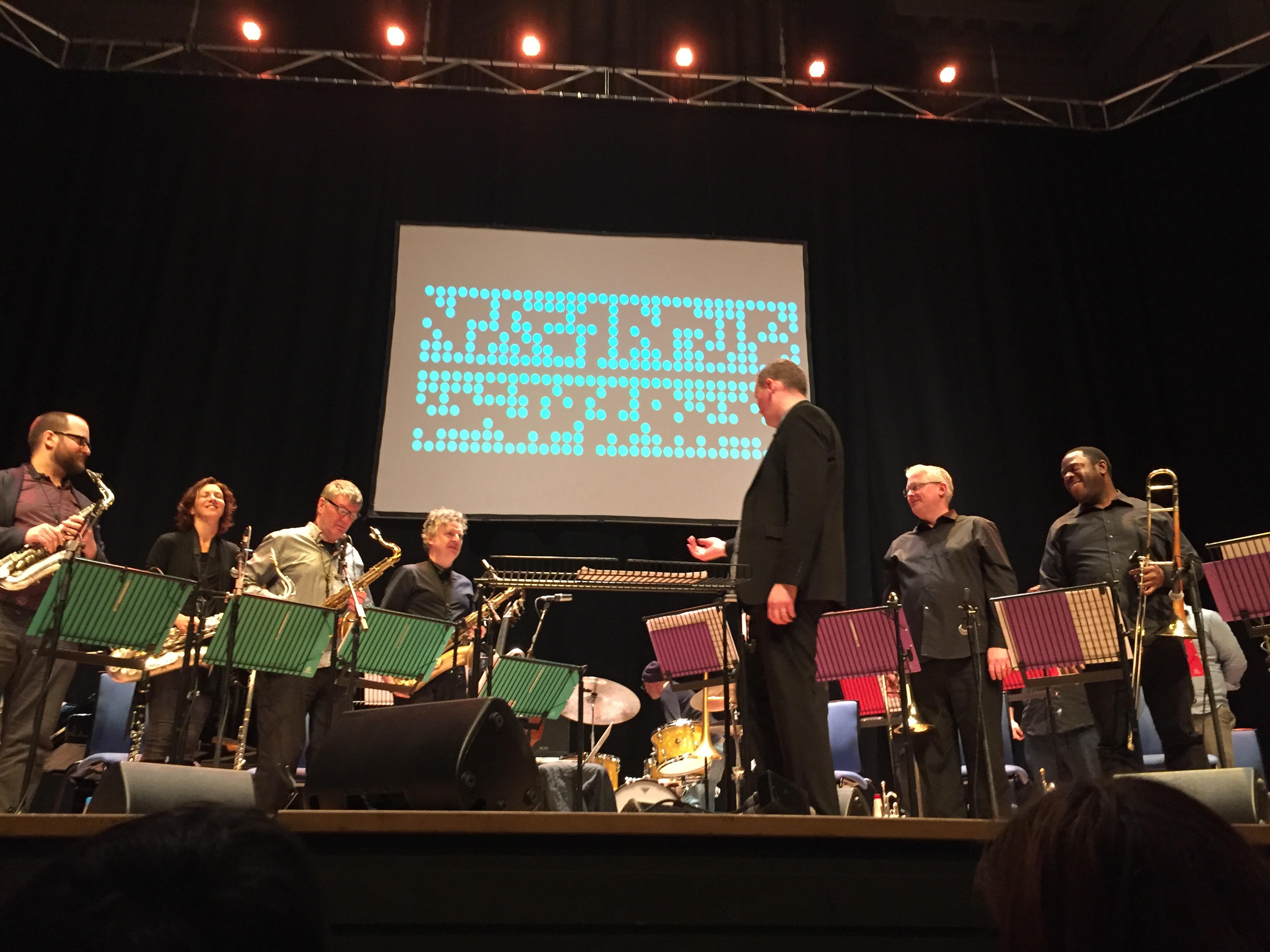 Interlude begins with a “bass-off” between Gemma Moore (baritone sax), Julian Siegel (bass clarinet), and Richard Henry (bass trombone) leading into a sparky theme from Siegel taken up with gusto by Jason Yarde (tenor sax) popping his mouth with rapid-fire double-tonguing, in turn followed by tenor Tori Freestone’s own game-uppping solo. By this point, the last bop on the last stop of the tour, everyone's playing is white hot. Liam Noble is a revelation as ever, somehow taking the tune through a rainbow of emotions and styles in a succession of harmonic modulations. The piece winds down softly to expansive legato writing.

Fantasy In D is a tribute to the great piano players on Blue Note, featuring Henry Lowther (trumpet), Tom Walsh (trumpet), and Trevor Mires (trombone). A sprightly bouncy hard-bop with melodic blue passages and flurries of improvisational activity. Siegel and Stan Sulzmann on tenor sax duel masterfully, leading us to the ensemble’s 18-gun salute and a lively farewell to a sensational tour.