Editor
Author of Funny Valentine, an acclaimed new biography of the jazz trumpet player and singer, Chet Baker.
Sunday, 28 May 2017 00:57

Rate this item
(2 votes)
Winner of the 2014 Kenny Wheeler Jazz Prize, Misha Mullov-Abbado is an in-demand bass player, composer and arranger based in London. He is a 2014 City of Music Foundation Artist and recently released his debut album New Ansonia consisting of all his own compositions performed by his quintet on Edition Records, which has been included in “Best Jazz Albums of 2015” by The Telegraph and BBC Radio 3 and been extremely well-received in newspapers and magazines across Europe. As an experienced band-leader but also a versatile sideman Misha has performed at many of London’s top venues such as Ronnie Scott’s, the Vortex, 606 Club, Pizza Express and Royal Albert Hall’s Elgar Room (as part of the BBC Proms Late series), as well as venues in the rest of the UK and Europe. Having won the 2014 Dankworth Prize for jazz composition Misha is an experienced composer and writes for various jazz groups as well as classical soloists and ensembles, and is influenced by a variety of jazz, classical and pop music. His second album, Cross-Platform Interchange, was released last month and reviewed here.

1. A title, like the one you gave to your second album, deserves a full explanation. How did that come about, apart from your love of trains, of course?

I first came up with the title as a potential name for my first album, then decided not to eventually. But it seemed quite clever at the time as it described the collection of songs I had and the journey of seamlessly transitioning from one genre or style to another. Then I used the name as the title of a song I wrote shortly after (which contains some transitions between different grooves and keys) so when it came to naming this new album it seemed much more fitting!

2. The recording of the album has seen a studio in Wales, but also “bedrooms, living rooms and basements in London”, how come and how did you guys manage that?

For this album I decided that for most of it I wanted to record a lot of the parts separately with a click track, as I wanted to have full control during the editing process and also be able to layer up parts sometimes. So during the two days in Wales we did the parts that required people to all be playing together, but then in London I spent a long time re-recording certain parts and adding new ones, for which we didn't need more than one musician to be playing at once. And so for that, we didn't need a studio.  Alex (the engineer) just brought his gear round to wherever was most convenient for all.

3. Cross-Platform Interchange is an incredible mix of different styles and inspirations. Can you tell the readers how this works for you, how do you write/ compose?

I have a tendency to write in lots of different styles as I get influenced by whatever mood I am feeling or whatever music is inspiring me at any point. I sometimes write just on manuscript paper (for example if a piece is quite simple or conceptual). Sometimes it's at the piano, particularly if the harmony is quite detailed. And at other times it's on the bass, which usually comes about from coming up with a melody first on the instrument.

4. Which song on the album best represents you?

To be honest every song represents a different side of me and my personality. If I had to pick one that I feel particularly close to it would be "Waves".

5. Two years ago, you released New Ansonia, how has your life and music developed since?

Since then I have refined my taste in different types of music slightly and am have a little less variety in the types of performances that I am doing. If anything, I am less involved in conventional jazz as I was before, and am more into playing original music and working with certain singer-songwriters, writing more for other groups including some classical ensembles, and traveling a lot more too. 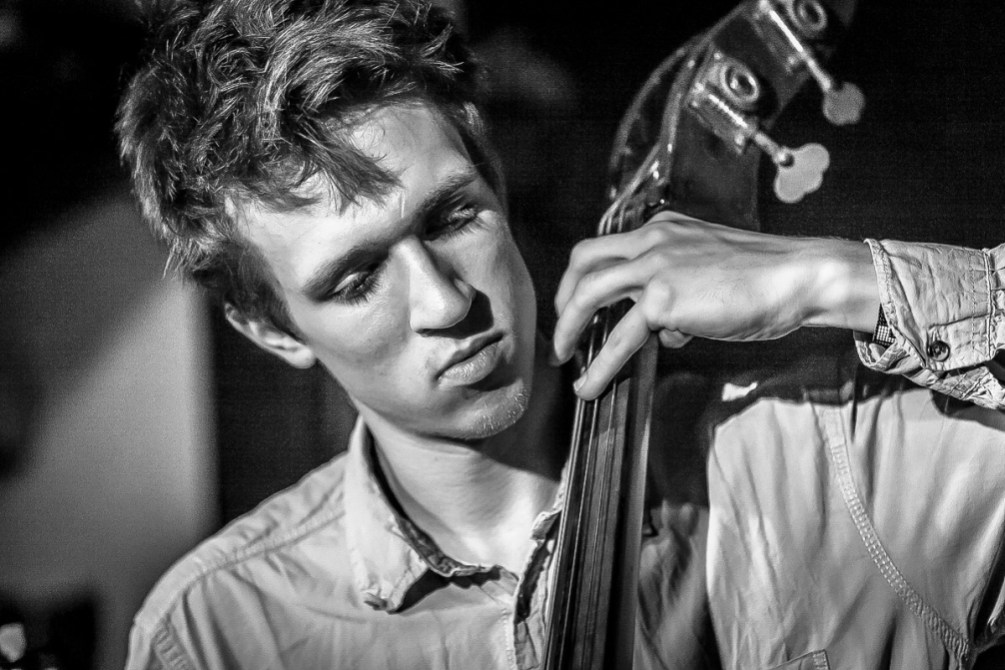 6. How has your creativity been affected, growing up in a family of masters of music?

I am certainly lucky to have been surrounded by lots of music right from birth, particularly classical music but also jazz and contemporary music often involving improvisation. I began studying composition at the age of twelve, and as a result of this, as I have always been interested in creating music.

7. Do you play any other instrument?  If so, which one and why?

Until recently I was a French horn player and used to play a lot in orchestras and chamber groups, particularly at university. I played the horn on one of the tracks in my first album. Sadly I don't play it anymore at all. I do, however, play the sousaphone and have been doing so for about six years now. I occasionally get asked to play in brass bands and figure it's as though my horn and bass have got married and had a baby...

8. You will soon undertake a busy tour, after the album launch, do you have a favourite venue you like playing at?

Not particularly. It always depends on the audience and reception, for me that makes a gig much more worthwhile than the venue. So for that reason often my favourite gigs have been in London venues due to the high chance that friends of mine will be able to come. During our July tour we will be playing in venues the band has never played at before (though most of them I have played at with a different band) apart from The Lescar in Sheffield, as I have always liked the crowd and atmosphere there (as well as playing there on my last tour I have played there two other times with another band).

9. Which is your favourite classical composer?

At the moment I don't listen to too much classical music, but over the years I would say my favourite has been Beethoven.

10. What, if anything, do you listen to when you relax?

Literally, anything or nothing! It totally depends on my mood or whether I want to listen to something new or something I know already.