Rate this item
(3 votes)
We’re looking forward to hearing Clare Teal and her regular accompanist Jason Rebello at The Pheasantry on Saturday 11 July. In advance of the gigs - we haven’t yet worked out whether to go to the early or the late sitting - we asked the singer and broadcaster about life in and out of lockdown.

1. How have you been finding lockdown?

Sometimes, I’ve been fine and  I’m sure we all have moments when it gets difficult. I’m generally a busy person, so it feels weird that overnight, most of the people I know lost all their work. I’m fortunate in being able to record my regular show for BBC Radio 2 from home, so that’s been carrying on. We also did a load of recording in January, so we’ve been working on mixing that and getting it ready for release.

2. What was your last gig before lockdown?

I was at the Cadogan Hall on 14 March with my mini big band. It’s usually such a joyous event and it was nearly sold out, but in the end, the hall was about two thirds full, which led to everyone having very mixed emotions. I’m usually doing around 70 gigs a year, so this time off is very strange. We’ve all adjusted quickly, so hopefully we’ll re-adjust whenever the restrictions are eased.

3. Have you been listening to some of the performances from musicians in their own homes?

I have particularly enjoyed some of the collaborations that have been going on - Paul Booth and his Bansangu Orchestra has really stood out for me. Seeing musicians from all across the world collaborate is so inspiring, but it also serves to remind us how important it is so bring our music to audiences, who bring their own reactions.

4 The Pheasantry is one of the smaller venues you perform at. How do you feel about a more intimate setting?

Singing takes me to such a variety of settings and each one has its own quality. There’s nothing quite like playing at the Royal Albert Hall, especially with a big band, like we do for the Proms and also at Christmas with Guy Barker. But a small, intimate venue brings a different discipline. In a small room like The Pheasantry, we’re all in it together and I’ve already had some good nights there.

5. How long have you been performing with pianist Jason Rebello?

Jason really is an extraordinary musician. He’s not really an accompanist - he’s a force of nature. His mastery is exhilarating and you never quite know where some of the tunes are going until we take it there. There’s no safety net when it’s just a duo and it’s immensely rewarding - for us and for the audience. 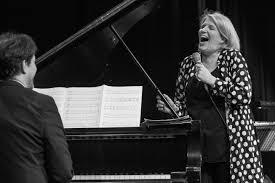 We created some new tunes which we recorded in January, and we’ll bring those out. Sometimes, we find new tunes and just decide to include them and set the key once we’re on stage. The audience will get some classics and some new songs - there will be a variety, as usual!

7. You’re renowned for your storytelling narrative at your gigs. How did you develop that?

I started out as an instrumentalist and used to get very nervous. When I started singing, I found it was completely different and never suffer with nerves. At first, I tried the formal introduction for songs, but it wasn’t me. My first professional gig was a Billie Holiday set and the audience was really supportive: I began channeling the moment and being more ‘me’. It really broke the ice and felt like really life. I never prepare the stories - they just pop into my head and it seems to work.

8. Given free rein, who would you perform a duet with?

Lou Rawls. His live version of ‘Girl from Ipanema’ is extraordinary. The phrasing just makes you feel so good.

If I had a magic wand, I’d find more ways for people to interact. I’ve been bringing more live tracks into any radio show - live music is so good for you. The bits in between the songs can make such a difference. We’ll have to see what the new normal looks like once lockdown is finally eased.

10. What’s your go-to way to pass time when you’re not playing?

I enjoy baking and getting out in the countryside. Living out in the rural South West of England has really been a help in this lockdown. I feel for people living in flats with no easy access to outdoor space.